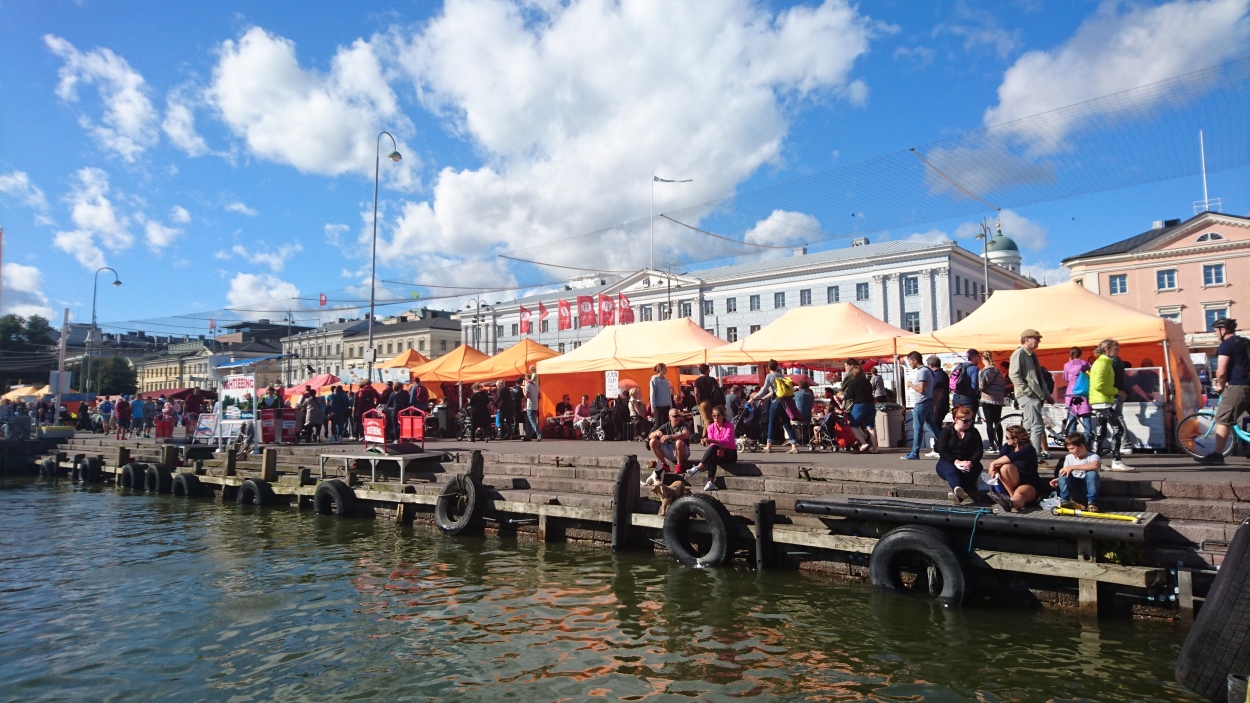 We took pictures of things which we knew our daughter would love: there was a picture of her most favourite bear in the local paper; the trees in a city centre park had been wrapped in paper, which we joked made them look like they were wearing socks. We bought souvenirs for her, knowing that she was not missing us even nearly as much as we were missing her. Isn’t that just the way?

First time around I had spent as much time as I could in every art gallery and museum that I could dig up from the old guide book I had brought with me. Second time round there was time for pastry and there was time for poring over Moomin memorabilia to take home for our daughter. We never felt the need to hide the fact that we were tourists, nor would we have been embarrassed to be.

We took a bus tour around the city – very touristy, but really good way of getting an overview of a city you are new to. It swept us through the more affluent suburbs along the south coast of the city, and up through the academic and civic heart of the city. We hopped off and we hopped on, with a visit to a church in a rock slotted in between. It took the pressure off, and told us what we could see.

As much as I explored the fabric of the city through the day, I was merely an observer, rather than a participant. I knew the buildings I wanted to see, and I almost floated through them, without any interaction. At night I cloistered myself in my perfect room, drank local spirit, ate sushi and read a good book. So much so that I had to find a bookshop to buy more things to keep me busy at night.

We took a short trip on a heritage tram. It set off from the Havis Amanda statue, and made its way around a set of local streets, including passing by the base of the mighty Lutheran Cathedral. It was open air and low to the ground: it felt like we were whizzing through the city at a breakneck speed. It cemented our love of trams, just trams with windows and soft seats, rather than wooden benches.

Our trip together would mark the last stay in the ill-fated hotel chain I had had my semi-mystical encounter with all those years before. Tellingly, the branch I had stayed in was no longer a hotel, but a block of nice flats. The one we ended up in put us in a basement box, next to a well frequented hotel smoking area, which was the focus of the social life of the hotel until the wee small hours.

The first visit had left my feet peeled and raw: walking the whole city in inappropriate footwear had built blisters on top of blisters, and I spent the final day barely able to walk, glad of a short walk to a hotel room and the ability to allow fresh air to do its wonderful work. It was my first solo foreign adventure, and I felt duty bound to make the most of it. I had planned meticulously, and stuck to it.

Walking through the city, I looked a lot at the architecture, but mostly I tried to stay hidden. That didn’t mean staying in the shadows; I walked proudly through the centre of all of the streets and the shops. I just didn’t want anyone to ever suspect that I was a tourist there; I didn’t want anyone to think that I didn’t know what I was doing, and so take pity on me. I stupidly shunned all contact.

That said, I also experienced some degree of luck. I found myself with the best hotel in a chain of extremely cheap, largely unfitting hotels: that hotel room, which was more like a mini apartment, would drive my holidaying decisions for years to come: the luck I had in stumbling upon the one good branch would never cross my mind while I stayed in a procession of shitty little hell boxes.

Each night I would pore over guide books, plotting routes all over the city, hoping to pluck up the courage to make my way in to any one of the eateries that I aspired so strongly to get myself in to. There was no barrier but my own insecurity, and I knew that a solo holiday was the perfect chance to work on this, my least favourite failure. It was a partial success: I mean, I never ever went hungry.

I loved the architecture, and I still do: it is a combination of styles I now recognise across the lands which border the Baltic. They all have a core of medieval cobbles and business-like seafaring, upon which has been grafted a set of tall, imposing Russian buildings at every turn. The gaps are filled with modernity and self-expression, but the basic template remains, and it is beguiling, to me at least.

We ate locally, and we ate Finnish. We ate in a faux cabin, sending itself up to the north of the country and the indigenous cultures there. We ate in a restaurant connected to the theatre, in a neighbourhood I would never have thought to take myself out to before. We ate in a local bistro, with fishing memorabilia all over the walls and an old-fashioned salad bar. In short we ate well.

The second visit was a completely different experience: we used the local transport to explore the whole of the city, and to a much greater extent than I had done previously. We visited outlying neighbourhoods and open-air museums; we visited public artworks and got out on to the cool calming waters of the Baltic. We even got out in to local restaurants every night we were there.

One day I was sitting in a local park, just watching the world go by, enjoying the fact that I had done this all by myself, when a woman stopped and asked me something. I wanted not to appear like a moron, but an Englishman faced with a foreign language always will. She wanted to know the time, and couldn’t understand it when I told her it in English. She uncomfortably asked to see my watch.

We sat at the top of the steps at the Lutheran Cathedral and looked out at all we had seen, and all we had wandered through. Bus loads of tourists came and went beneath us; trams circled the city with a metronomic frequency. We sat and watched the thrum and the flow and realised that we were glad we had chosen this city to visit. We should definitely go back, with both of the girls.