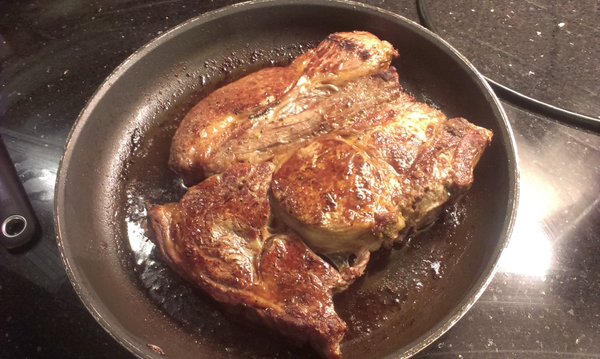 I love words. Have you noticed? I tend to use rather a lot of them, hence the title of this post (I also love music – it’s a Nick Cave lyric: he has lots of albums available for you to purchase). I don’t use pictures quite so much, and my reliance on bulleted lists has waned somewhat over the years. Why then do I have so many recipe books, which feature both of these? We call upon the author to explain.

Can you imagine recipes in prose form? I like them; I find them conversational. Yes, they lack the precision in weights and measurements which most modern recipes rely on, but is that always a bad thing? I rarely follow a recipe to the letter anyway, at least after the first attempt. I would describe my cooking style as improvisational: I respond to the pan and the pantry, rolling with the splashes.

That slightly fast and relatively loose approach lends itself rather to a chatty recipe, where the dish and its approach is described, rather than being minutely spelled out. It’s like a product description as opposed to a strictly coded product. It allows for embellishment and for the whim of the cook behind the hob. Some things are highly technical; the vast majority are anything but. Examples time.

A favourite dish of mine to cook, and a favourite in our house, is simply called “Salmon Pasta”. The sauce is based on a classical French method for a creamy herb sauce, and can be made with any herbs you fancy. Personally I go with Tarragon, even though the original I found was with Chervil.

I start by sweating off a finely chopped onion in a small amount of vegetable oil. At this point I must point out that the original recipe used shallot, rather than onion, but I find shallots go mouldy rather too quickly. Red onions or white / brown work equally well. Once translucent, add a glass of white wine to the pan. Let the booze boil off and reduce the remaining liquid by about half. So far so good.

At this point it’s perfectly acceptable to throw in some chopped fresh herbs – Tarragon for me – and / or their finely chopped stalks. Now comes stock: half a litre of what recipes term “good fish stock”. I don’t have that, and I never will, so I use a vegetable stock gel, which I melt in the reduced wine. Add a splash of boiling water to loosen it off. Finish the sauce with a good swirl of cream, bring to a boil and then switch off. Add the rest of the herbs and let it sit. Hot pasta will bring it all back to life.

If you’ve ever read a medieval recipe book, you will likely have been daunted too: they are written primarily for chefs: people who will have received training in the same manner as the recipe author. That allows for a considerable number of corners to be cut, which modern home cooks, and modern chefs, are left bewildered by: “bake it wel” is a common instruction, meaning to bake it until it is done. No further instruction was deemed necessary. This would not cut the mustard today.

The names of ingredients are also an issue in medieval recipes: “The Forme of Cury”, a 14th century book, listed a number of curious ingredients: for example, Peions, Viaws and Sawge. Unrecognisable to us today, perhaps, however they are Pigeons, Verjuice and Sage. Likewise, my use of a stock gel, above, will have been rather mysterious to some, contentious to others.

My salmon pasta dish is finished by adding freshly cooked, red hot Tagliatelle, along with a generous portion of thickly cut raw salmon, to the rested, cooked sauce. The sauce, having sat for a while, will have thickened up gloriously; the hot pasta will cook the salmon to perfection. Serve immediately.

Another favourite in our family is any dish made with Spanish Paella rice. The dishes have literally no connection at all to anything we’ve eaten in Spain, or to Paella. Except, at a push, for the type of rice used: if you can find Bomba then you are very lucky; doubly so if you can find Senia; all I can ever find is “Paella rice” and, even though I am making nothing even close to Paella, it’s what I go with.

As with most dishes, I start by shredding down a carrot or two, along with a bulb of garlic, a couple of onions and a stick or two of celery. I use a food processor. If you want to do this with a knife, be my guest, but I find that, as the vegetables are going to cook down in to the sauce, life is too short.

Before I take the veg out of the machine, I fry off a lot of belly pork in a deep, non-non-stick pan. Season well, and keep the fat where it is. Once the meat is cooked, put it in to a bowl, to one side.

Now we get to my favourite bit: add the veg base to the hot pork fat and cook it down. I may add a couple of glasses of wine, and cook it down yet further. It should form a dark mush. This is good. Add in whatever you like in the way of herbs and spices: I currently use paprika, thyme, saffron, ancho chilli flakes and bay. Give it all a stir, but don’t let it burn. One part cooked out and spiced veg base to one part raw rice is a good rule of thumb, as far as I’m concerned. Add in the rice and stir well.

Then add in at least half a litre of stock: if you have made your own, great; I’ll be using hot water and a stock gel. Stock powder is great too. Now cook the rice for a good 20 minutes, testing the grains in the last five minutes, so that they’re neither chalky nor squidgy. Once past chalky, put the meat back in to the pan. At this point I would also add in some cooked peas (frozen, boiling water poured over them to refresh) or some slices of pre-cooked red peppers. A few minutes’ simmer and it is ready.

To me, that is a perfectly accessible recipe: it describes a process which an experienced cook can use and abuse to their heart’s content. I’m not sure you really need to be told what to do, do you?